North Queensland’s marine and estuarine environment is home to many interesting animals, including some harmful jellyfish collectively known as marine stingers. These small marine stingers are easy to avoid but can cause discomfort if you are stung, and some of the tropical species, such as the Irukandji and Chironex fleckeri (the Box Jellyfish) can be lethal. However, the intensity and severity of the sting from a marine stinger varies with the health and fitness of the victim. While it is true that certain species of jellyfish can give very painful, and even fatal stings, reports of a killer jellyfish sting is a rare occurrence.

The jelly fish / stingers of concern are generally a problem along the coast and not usually affecting the Great Barrier Reef.

Stinger Season (harmful marine jellyfish) usually starts here in the far north Queensland around late October ending in May when the waters cool down. It is when jellyfish species, in and around the Great Barrier Reef, come to this area because of the warm, tropical waters. The young polyps tend to cling to rocks up the estuaries in the cooler months, and asexually reproduce (by budding – growing new jelly fish from itself). Once the warm weather comes, and we start to get the rains, the warmer water signals the release of the juveniles who then travel down the coast and sexually reproduce.

Swimming on the beaches

As a consequence, you need to take care when swimming at beaches during this time and only do so in patrolled beaches, within the stinger enclosure (nets are put out around designated swimming areas at the beaches and are checked by lifeguards for stingers daily). It is also recommended that a full-body lycra suit, or equivalent, be worn to provide a good measure of protection from jellyfish stings, as well as the sun.

Be assured that measures have been implemented by local authorities, researchers and tourist operators to maximise swimmer, snorkeler and diver safety on Cairns’ Great Barrier Reef and northern beaches, at all times of the year, including the ‘stinger season’.

Remember the rare plenty of freshwater swimming holes in and around Cairns where you can enjoy a cooling swim without worrying about jellyfish or stingers…… Just the crocodiles!! Only kidding but do ask the locals or drop us a line) of where we go to cool off. You need to have an awareness of the wildlife (crocs included) when swimming in the tropics. Always follow the National Parks and lifeguards signage.

Out on the Reef

Things are safer on the Great Barrier Reef, your chances of encountering stingers are very, very small. All reef charter boats have head to toe Stinger Suits on board for snorkelers to use. Some are for hire (for a nominal fee) and others include them in their prices. As the stingers are usually higher in the water level divers have even less chance of encountering them. So, a shortie wet suit or “rashie” (surfers rash vest – thin long arm shirt) is generally OK. Hover again we recommend full suits just in case.

Box Jellyfish
Box Jellyfish take their name from their shape and appearance. Their ‘main body’ is square shaped and tentacles, which can be up to 3m long, stream from its corners and edges. Generally, box jellyfish have a translucent colour, making them difficult to spot in the ocean.

The 2 larger species are Chrionex fleckeri and Carukia barnesi and generally have fist sized bodies (Chironex can grow considerably larger but rarely) with tentacles trailing a few meters.

The predominant recorded stings from the Box Jellyfish are along coastal areas (i.e. beaches) and the box jellyfish is a coastal species and is not found out on the reef, but they can sometimes be found around islands close to the mainland.

Irukandji
The Irukandji is another dangerous stinger but is quite different in appearance to the box jellyfish. Irukandji have a small 1-2cm bell which is extremely difficult to see. They may appear in epidemic proportions close to shore, which presents a real hazard to swimmers. Irukandji cause an initial minor sting, followed 5-40 minutes later by severe generalised muscular pain, headache, vomiting and sweating. The sting by some species can also increase blood pressure which may become life threatening. These symptoms are sometimes referred to as Irukandji Syndrome. 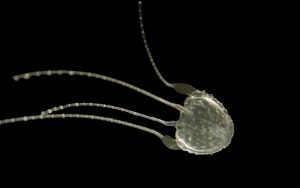 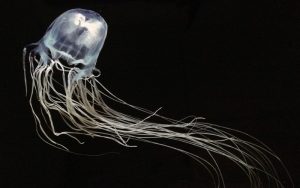 Tropical marine stings can be life threatening, so it’s vitally important to provide effective first aid. If someone is stung you should immediately:
• Call Triple Zero (000) Emergency for Ambulance Immediately
• Provide emergency care including CPR if needed.
• Treat the sting by pouring vinegar onto the affected area.
• Seek medical aid and/ transport to hospital.
Note – the vinegar will only prevent the stinging cells (nematoblasts) of the jellyfish from firing but will not stop the pain.

The latest first aid treatment is to remove the tentacles (do not use bare hands) and once removed, soak the affected area in hot water (104-113 F or 40-45 C) for at least 20 minutes. Make sure the water is hot but not scalding. Stay in the water for 20 to 45 minutes.

Bluebottles, sea wasp or Man-O-War are various names given to hydroids that look like jellyfish but are actually a colony of specialled cells acting as a single animal These generally float on the seas surface and are blown around by winds and currents. They have a single long tentacle that can often get caught on a snorkeler or diver and give a sharp stinging pain. These are not fatal and similar to a bee sting, However some people do have allergic reactions to them, Do not use vinegar on hydroid stings. Wash off and use ice packs.

Fire corals are a genus of colonial marine organisms that exhibit physical characteristics similar to that of coral. The name coral is somewhat misleading, as fire corals are not true corals but are instead more closely related to Hydra and other hydrozoans, making them hydrocorals. Similar to the Bluebottles above, although it can be quite painful, a sting from Fire coral is rarely dangerous unless accompanied by an allergic reaction or anaphylactic shock. In fact, the most serious effects seen after extensive stings are possible nausea and vomiting for two to three hours afterwards

Dangerous snails! Because cone shell snails are slow-moving, they use a venomous harpoon (called a toxoglossan radula) to capture faster-moving prey, such as fish. The venom of a few larger species, is powerful enough to kill a human being although you would have to do something pretty dumb to get stung. The sting usually occurs when divers in deep reef waters handle the snails. Swimmers and snorkelers are unlikely to find cone snails in shallow intertidal waters.

Stonefish stings in Australia can cause envenomation and death if not treated. The stonefish is one of the most venomous fish in the world and when stepped on by a human forces venom into the foot. 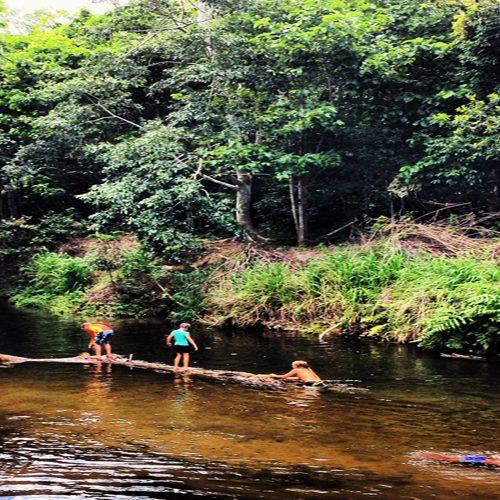 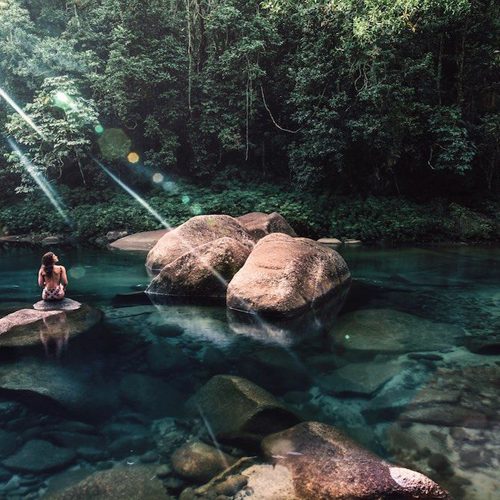 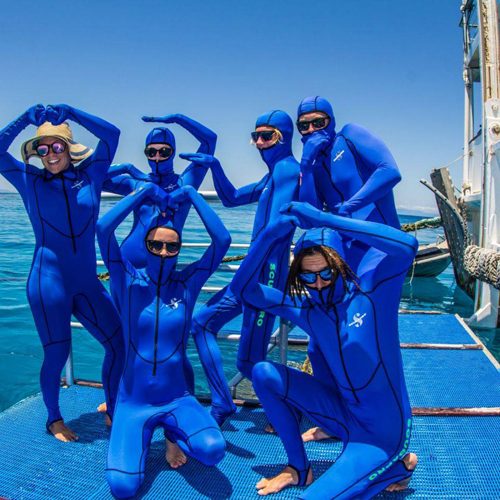 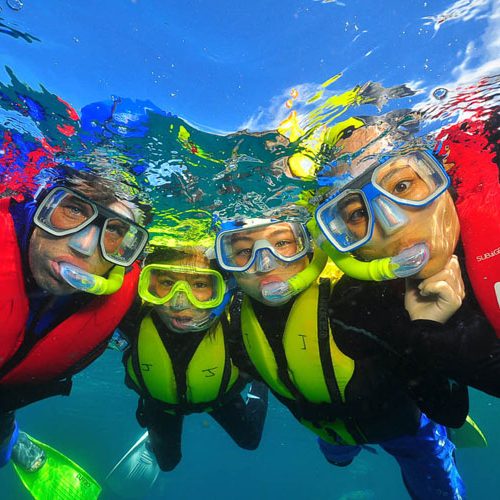 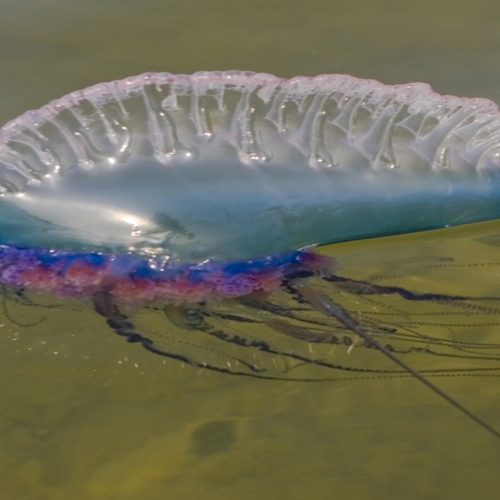 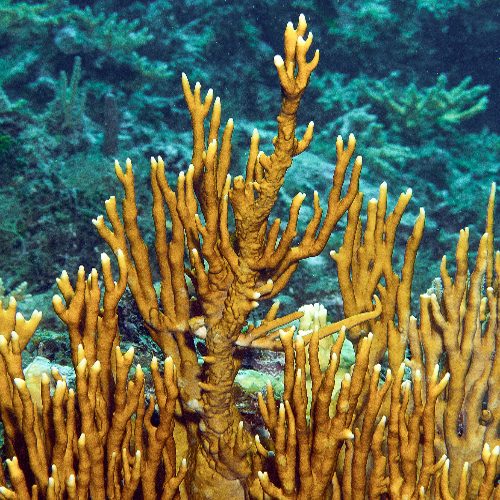 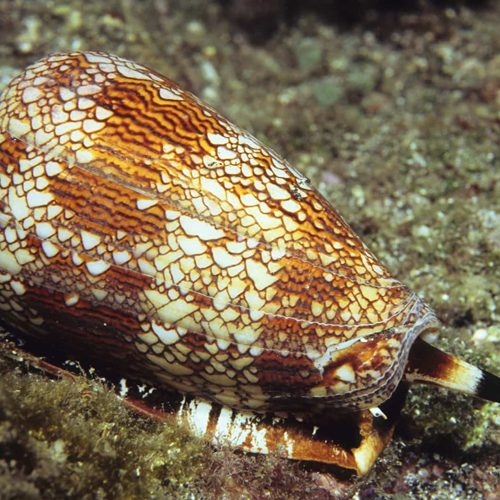